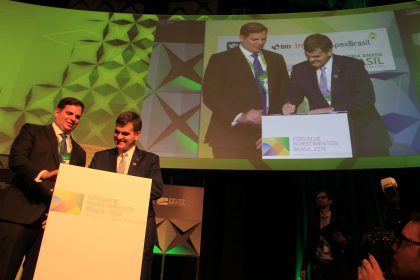 Enhancing the attractiveness of Brazil as a strategic destination for foreign investment in energy projects is one of the main objectives of the technical cooperation agreement signed this Thursday (10/10) in São Paulo by the Brazilian Electricity Regulatory Agency (ANEEL) and the Brazilian Trade and Investment Promotion Agency (Apex-Brasil).

The partnership foresees mutual efforts to attract foreign capital to the Brazilian electric power sector through activities related to intelligence, promotion and investment facilitation. Foreign investors already present in the country will also be supported through the joint work of
ANEEL and Apex-Brasil.

The agreement was signed by the General Director of ANEEL, André Pepitone, and the President of Apex-Brasil, Sergio Segovia, during the 3rd edition of the Brasil Investment Forum (BIF).

“The agreement will further boost foreign investment in the electricity sector, which is already one of the main destinations for international capital in Brazil. In generation, transmission and distribution, we currently have investors from Spain, Italy, France, Portugal, China, India, Colombia, among others. The safe and stable regulation from ANEEL favors the attraction of this capital. And now, with this partnership with a body that has excellence in commercial promotion in Brazil, such as Apex-Brasil, we will seek even more resources for the sector,” says Pepitone.

“The partnership will allow us to disclose opportunities for foreign investors in a structured way, prioritized by source or market. In addition, it will strengthen the image of Apex-Brasil as a reference and a source of information for foreign investors seeking business in Brazil,” Segovia believes.

The agreement provides for strengthening ANEEL’s expertise in promoting solid and transparent recognition of Brazil’s regulatory framework and the development of a coordinated strategy with Apex-Brasil’s international offices and embassies to foster investments in the electricity sector.

ANEEL’s role as a regulatory body was recently recognized by one of the main international risk assessment agencies, Standard & Poor´s, which produced a report stating that ANEEL’s firm and secure performance grants predictability to the regulation of the Brazilian electricity sector, ensuring the attraction of investments.

The largest event for investment attraction in Latin America takes place on October 10 and 11 in Sao Paulo. Organized by the Brazilian government – through Apex-Brasil, the Ministry of Foreign Affairs (MRE) and the Ministry of Economy – in partnership with the Inter-American Development Bank (IDB), BIF 2019 highlights investment opportunities in strategic sectors of Brazilian economy, such as infrastructure, energy, agribusiness, technology and innovation. The event is a unique opportunity to discuss improvements in the business environment in Brazil.

BIF 2019 hosts around 1,500 participants, including executives from large companies, opinion formers, high-ranking government representatives, foreign investors and Brazilian businesspersons. The 2018 edition was attended by foreign guests from more than 48 countries. Ninety percent of the audience was from the private sector.

What you can read next